The writer Iain Banks announced today that he is suffering from terminal gall bladder cancer and does not expect to live for more than a year, which is very sad news. Banks was born in Dunfermline in 1954 and now lives in North Queensferry in Fife, but he has visited Islay on a number of occasions and also written about it. 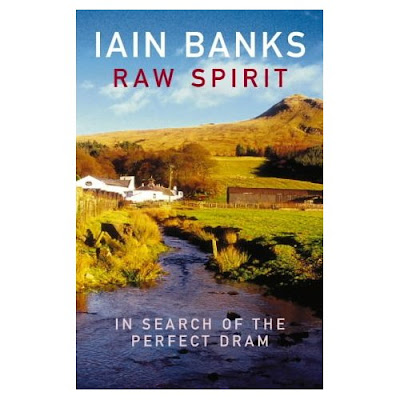 His 2003 book 'Raw Spirt: in search of the perfect dram' is essentially a travelogue describing his tour of Scottish distilleries, a journey which of course starts off in Islay:

'The first signpost you see coming off the ferry at Port Ellen on Islay has only two words on it; it points right to ARDBEG and left to BOWMORE. Brilliant, I thought; a road sign that is made up of 100 per cent of distillery names; a proclamation that you are on a Island where making of whisky is absolutely integral to the place itself, where directions are defined by drink!

This was, patently, a great place to start the distillery tour. I love Islay whiskies. There are seven working distilleries on the island - pretty good given that there are less than three thousand people on the place - each producing their own distinctive whiskies, and I have a deep affection for all of them. I have favourites amongst those seven basic malts; but they're basically in my top twenty Scotches...

Distinguishing between different styles of Islays, the most obvious micro area lies in the south, on the shore stretch of coast - extravagantly frayed, wildly indented, profusely hummocked ad multifariously cragged - facing south east towards the Mull of Kintyre.

The three southern coastal whiskies of Islay - with Laphroaig in particular providing the radical example - constitute what is almost a different drink from whisky. The distinction is that sharp... The Islay distilleries are all pretty spoiled when it comes to setting. The two least favoured are Bruichladdich and Bowmore, the former because it's just a pleasant assemblage of buildingsby a nice wee village on a stretch of shore which is by turns sandy and rocky, with a broad, shallow sea loch in front and low, tree-lined hills behind (see, its actually in a pretty damn spiffing situation, but we are talking relative values here); the latter because it's roughly similar context on the opposite side of Loch Indaal and is part of the town of Bowmore. In fact, the distillery's so intergrated into the rest of the town that, when its stills are producing, the excess hot water helps to heat the municipal swimming pool next door. Again, Bowmore, Islay's effective capital, is a fine, attractive little town and no disgrace at all to the smart, tidy distillery on its southern perimeter, it's just that the other Islay distilleries are so much more dramatic in their surrounding...

They look elegant. They have whitewashed walls, black roofs and black detailing, pagodas standing proud, clipped lawns ad a general air of discreet pride. Handily, all of themhave their names in VERY LARGE LETTERS painted in black on their tallest seaward walls, so if you take photo from the right angle you never need to scratch your head and mutter, Well, I think it looks like Laphroaig, but maybe it's Ardbeg ...

Caol Ila and Bunnahabhain sit in even more dramatic scenery, wedged at the bottom of steep hillsides as though teetering on the brink of falling in to the sea, looking respectively across and up the sound of Jura, with the Paps of Jura across rising in an appropriately, if colossally, mammiform manner across the water. There used to be a quite spectacularly complete but rusty wreck lying at a steep angle up on the rocks just along the coast from Bunnahabain - I remember seeing it from the ferry as we approached Colonsay, a dozen years or so ago - but the same stormy seas that drove the ship there in the first place have pounded it to pieces since and there's little left to see now'.

Banks also mentions that during this visit he stayed with somebody who had a role in his literary career:  'On Islay I'm staying at Ballivicar farm, near Port Ellen, with Toby and Harriet Roxburgh... Toby is a man I first got to know as the person who bought The Wasp Factory for paperback, when he was editor of Futura. Later he took on Consider Phlebas, my first science ficion novel'.

Banks' whisky research for this book was not his first time on the island though. From the start, his novels inspired fierce devotion and discussion and in the late 1990s people began holding 'Crowcons' to share their enthusiasm. In April 1999 the fourth Crowcon was held on Islay, and Banks attended. In 'Raw Spirt' he recalls visiting 'Islay years ago, when we went to Crowcon a microcon of people who'd got together over the net on a newsgroup discussing my books (hence the 'Crow' bit). One of the group happened to live on Islay and have a connection with Ardbeg distillery, which  is why I'd already been there before'.

Of all Banks' novel, The Crow Road  (1992) is the one that is most evocative of the West coast of Scotland, even if Islay itself does not feature. It is set in Gallanach, partly based on Oban, with events taking place at various Argyll locations. In 1996 it was made into a BBC TV series starring Bill Paterson and Peter Capaldi - for the purposes of the TV series, Tarbert, Loch Fyne doubled up as the village in the story, with most of the filming taking place there or nearby (including scenes shot in the Islay Frigate Hotel in Tarbert).

In September 2008, Banks appeared at the Islay Book Festival, talking about his novel Matter in a session at Port Ellen Primary School.