'On Wednesday last, the 30th [August 1870] the annual regatta came off in Lochindaal Bay,  at the village of Bowmore. The committee displayed much activity, taste and energy in all their arrangements previous to the commencement of the proceedings of the day. At an early hour flags were hosted at the most conspicuous places nearby more and at some of the principal shops in the village. The wind was about SW by Southf and a strong breeze blew during the whole day. The weather was also very beautiful so that parties in great numbers, from all parts of the island, made their appearance on the ground at an early hour, avaling themselves of the most suitable stations to have a full view of the bay.

The boat races started with one 'confined to skiffs 25 feet keel' which was won by Mr Fraser of Port Ellen's boat 'Annie'. Following this there was a yacht race won by Captain Graham of Port Ellen's 'Fion'. The third race 'confined to boats 16 feet keel' was won by Mr M'Affer [McAffer] of Bowmore's 'Spunkie'.   There was then an open race won by Mr M'Aulay [McAulay] of Portnahaven's 'Elizabeth'.

Finally there was a rowing match for 'four oared skiffs' - 'This was a very exciting race, as the men seemed equally matched for the natives of Portnahaven are a hardy, muscular and strong race and accustomed to the oar. The race started as fair as could be, the boats playing right in the wind's eye'. It was won by Mr Connolly of Portnahaven's boat 'Margaret'.

'This concluded the sea sports and thereafter commenced the land sports, the prizes for which were given by gentleman residing at present at Mr Campbell's hotel, Bridgend'. The races included a 300 yards boys race won by A.M'Gregor [McGregor] and a 400 yards race for men won by D. Ferguson. There was also a long jump (won by John Kirk) and a 'high leap', while Mr Samuel McIntyre from Bridgend won the 'putting the stone competition' involving an 18 lb weight. 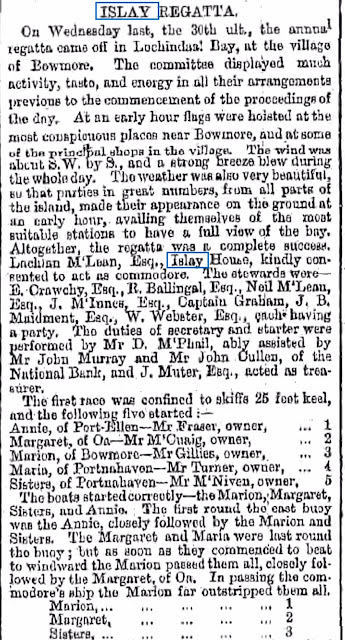 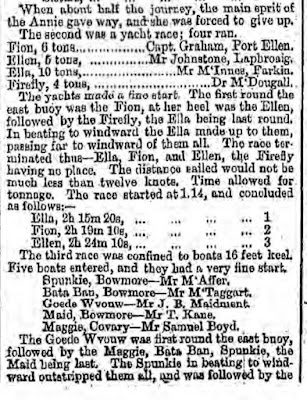 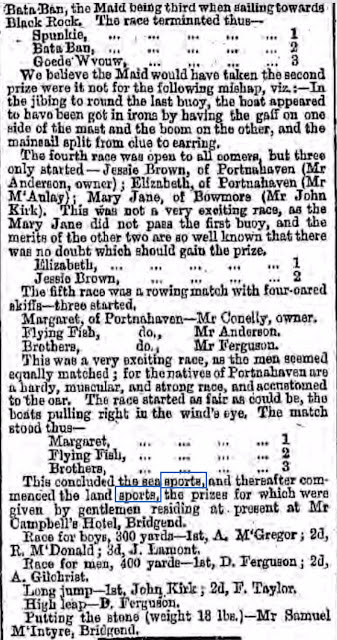