Callumkill estate, near Ardbeg, is up for sale. The starting price is £1,500,000, for  2100 acres, farmhouse, buildings and livestock. There's Victorian terraced houses for sale for not much less than that in parts of London, but sadly it's still a little out of my price range...

I would certainly buy it if I could, as my grandparents lived and worked on the farm for many years and I spent many summer holidays there in the 1960s and 1970s. 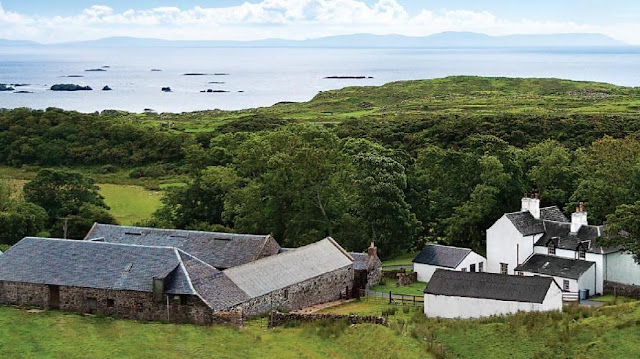 The estate agent's brochure (Savills) has a summary of the site's history:

'Callumkill means Keill (chapel) of St Columba. St Columba was an Irish saint who left Ireland in AD 563 and settled in Iona. Abbots of Iona held supremacy over all the Columban monasteries in Ireland and Scotland. The chapel of Callumkill is gone now, but the main house is built on its ruin and uses some of the stones, an example of which is the sandstone around the kitchen fireplace. There is no formal record, but the house is believed to have been completed before 1851.

The earliest record of Callumkill is in a Crown Charter dated 23rd February 1760, granting Daniel Campbell of Shawfield the lands and Barony of Islay. In November 1855, James Morrison of Basildon Park, Berkshire, and Islay, sold Kildalton (including Callumkill) to John Ramsey. The Ramseys sold Callumkill to Henry Allan, the manager of Lagavulin distillery, in 1924. Dr John Cecil Macgown purchased Callumkill in 1952 when he and his wife Marjorie responded to a small advertisement in The Times for a Scottish sporting estate. They visited Islay, walked up to the top of Callumkill’s first ridge, took one look at the view over the fields, ridges and hills and out to the sea beyond, and knew they had found a very special place. They both lived out the rest of their lives there; at 110 years old, Marjorie lived to be the oldest woman in Scotland. The estate passed to her grandson, the current owner, in 2008'.

Given the farm's name, it seems clear that there was a church dedicated to St Columba in the area, although an RCAHMS note from 1978 states 'There is a strong local tradition of a chapel at Callumkill, but the owner, Dr McGowan, has no knowledge of its likely site'. Nevertheless it certainly possible that  it was on or near the site of the house or nearby farm buildings, and that old stone was recycled in the building..

I also recall that there was (and presumably still is) some kind of partially underground chamber in the lawn of the main house, though whether that was a storage place linked to the building of the house in the mid-19th century or an earlier structure I am not sure - could it be that mound in the front right of the picture (anybody know?) 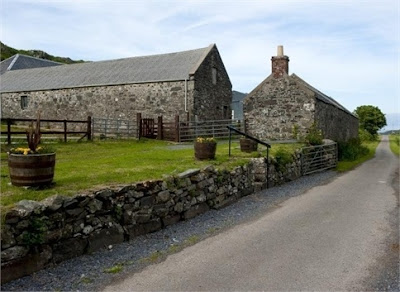 My grandparents Neil Orr (my namesake, 1906-1980) and Janet Orr (born Janet MacTaggart, 1906-1990 ) lived at Callumkill in a corrugated-iron clad wooden building which I think was demolished after they moved to Port Ellen on retirement in the late 1970s. I went by there a couple of weeks ago and could see no trace of it - it was near to where a fairly new cattle shed now stands, in between what is now described in the brochure as the 'shepherd's cottage' (where Robert Shaw and family lived at that time) and the older farm buildings.

That's me with my granny outside the house, some point in the 1960s: 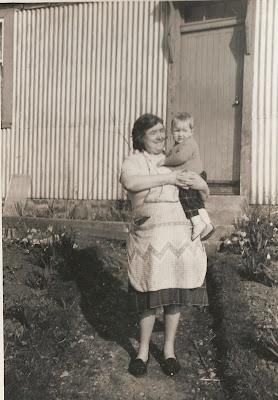 And that's Neil Orr senior and junior at Callumkill in the same period: 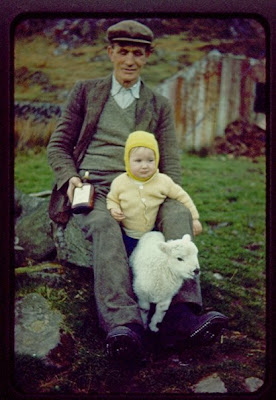 Photos of Callumkill from Savills brochure, except for the two family photos above.