Neil Orr was a teacher in Portnahaven in the late 19th century, and a significant figure in the Gaelic song movement.

His parents were John Orr and Ann McDougall, who married in Bowmore on 9.7.1848. They must have moved to the mainland afterwards, because Neil was born in Greenock on 16 November 1864.  However he moved to Islay along with his sister Marion and became the headteacher at Portnahaven school. According to C. Gordon Booth's 'An Islay Notebook', the school was built in 1878 and 'Ten years later the roll was 209 with Neil Orr as head'. The 1896-7 Kilchoman Valuation Roll shows that he was living then at the Public School Dwelling House, Portnahaven. He left the school in 1905, and moved to Edinburgh where he died in 1942.

While at Portnahaven he put a great deal of effort into the Children's Choir, and his contribution was nationally recognised in a songbook entitled 'An lon dubh (The blackbird) : a collection of twenty-eight Gaelic songs, with music, in two-part harmony, intended for use in the schools of the Highlands, but all the songs are suitable for adults' published in around 1905 by J & R Parlane of Paisley, and edited by Malcolm MacFarlane.

The preface states: 'We are indebted to Mr R. D. Jamieson, Glasgow,  for the Harmonies of the greater number of the Songs, and for the use of the remainder to Mr Neil Orr, Schoolmaster,  Portnahaven, Islay, whose Children's Choir have been singing them for several years'. 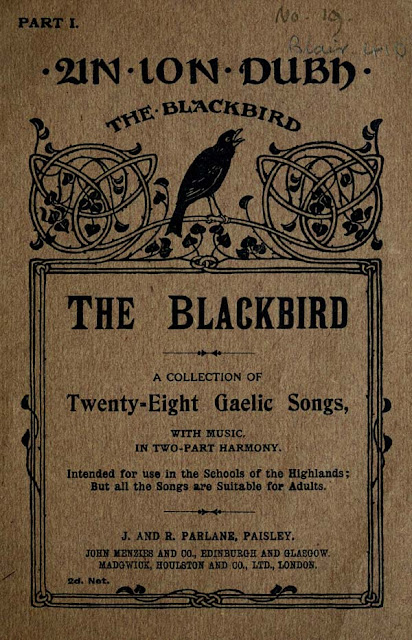 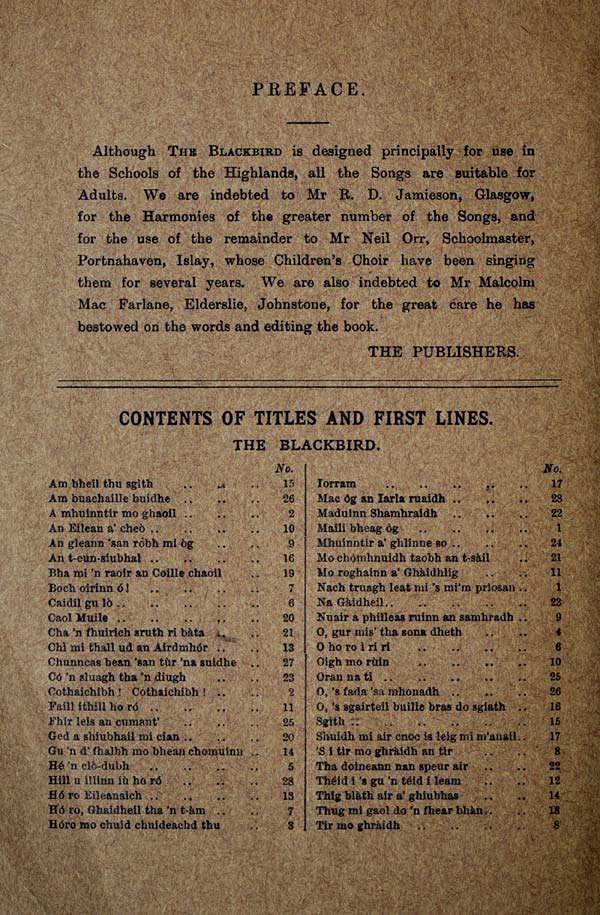 In 1901, both Orr and the school choir won prizes at the Highland Mod in Glasgow: 'In the Junior Choral Competition the prize fell again to the Rhinns of Islay, and as the competition was exceedingly keen this time, Mr Neil Orr, the indefatigable conductor of the winners, has a right to be proud of his success. The victory was due largely, no doubt, to the perfect pronunciation of the children, who are all native speakers. It was delightful to hear the children prattling the prettiest Gaelic with their peculiar Islay accent, which forms a link beteween the Highlands and Ireland... Mr Neil Orr, who so enthusiastically and admirably trains his Islay choir, was personally successful in several of the solo singing competitions. He deserves congratulations, and, still more, the thanks of the community he interests and influences. We have always contended that the children of our country only want good teaching to bring out this native aptitude for music. Mr Orr proves this to be true, because certainly he has not a large population from which he can pick voices' ('Music at the Highland Mod in Glasgow,  School Music Review, November 1901).

Neil Orr was involved in a local committee collecting details of local place names to inform a national survey of Scottish Place-names. The Report of the Annual Meeting of the British Association for the Advancement of Science, 1894, includes a a report of the Scottish Place-Names committee, 'consisting of Sir C. W. Wilson, FRS (Chairman), Dr J. Burgess (Secretary) and Mr Coutts Trotter'. They seemed to have been informed by local committees across the country, including one on Islay: 'The first lists were for Kilchoman parish, consisting about 970 names, and were undertaken by a local committee, consisting of Rev.J. Barnet, Mr William Campbell, Mr Donald McGilp, Mr John Campbell, Rev. James Macmillan, Mr Neil Orr, Portnahaven; and Mr John Brown'.

Neil Orr also seems to have supported the Land reform movement - 'Neil Orr of Portnahaven' is mentioned in the 1917 book 'Highland Heroes of the Land Reform Movement' by Joseph MacLeod, though I haven't been able to read the book itself (if anybody has access to a copy of that book I would be interested in what it has to say about Orr and indeed any other Islay information). In any event, he would have been well aware of the impact of emigration. I believe his grandfather was Duncan Orr who lived as a farmer at Torra, where Neil's father John was born in 1820. Duncan emigrated to Ontario in Canada, along with other family members.

At the excellent 'Old Islay' group on Facebook, somebody has posted this picture (courtesy of Betsy West) of Neil Orr and the Portnahaven School Choir in 1902. The people in it are listed as: 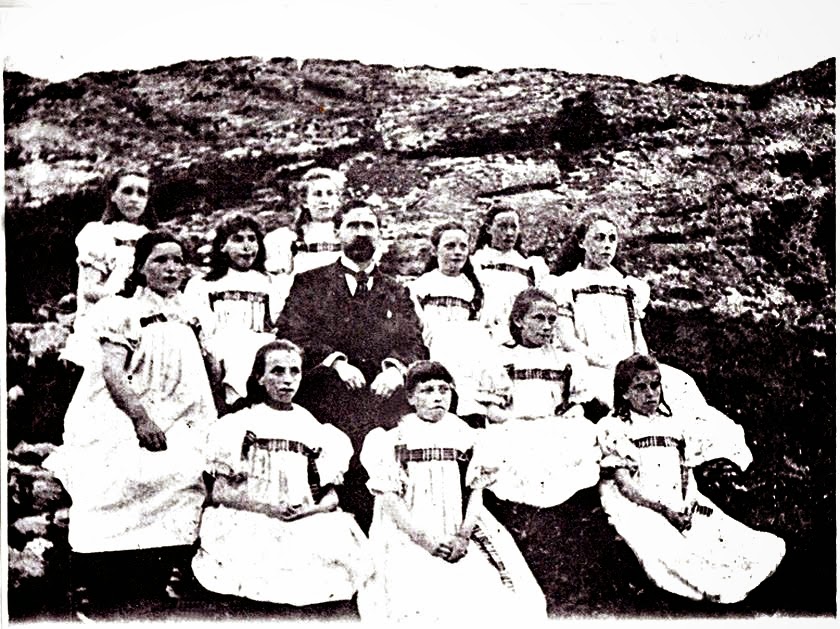 (This Neil Orr is another namesake of mine, though not a direct ancestor)