Outside the walls of the ruined chapel at Kilchiaran there is an intriguing stone lying in the ground. It is a fine example of what is known as a cup-marked stone, with a number of circular carvings on its surface. Examples of similar stone carvings are found elsewhere in Scotland, Ireland and northern England, and indeed further afield. Archaelogists find it difficult to even assess how old they are, but most agree they date back to the neolithic period (between 4000 and 6000 years ago).

According to RCAHMS: 'A cup marked and perforated slab lies in rough grass 20yds WSW of St Ciaron's Chapel (NR26SW 6) and 20yds N of the road. The slab is of schist 6ft by 3ft with a thickness of 6ins exposed, the rest being buried. Graham noted 22 cups in 1895 but only 18 are now visible, 6 1/2 ins in maximum diameter and 4 ins deep, clearly man-made but some having vertical sides. Two cups have penetrated the slab completely. The local tradition is that church-goers turned a pestel in any cup-mark and wished. The constant turning wore the cups, in some cases right through the stone'. There is a stone in one of the holes to this day, as shown in the picture I took this summer.

Robert C. Graham noted the stone in his 1895 work 'The Carved Stones of Islay': 'There are indications of various ancient buildings near the chapel, and to the west of it there is a curious cupped stone, of which a sketch is given. The holes vary in depth; two, which are shaded, pierce the whole thickness of the stone'. Graham included a sketch of the carvings, not all of which are still clearly visible: 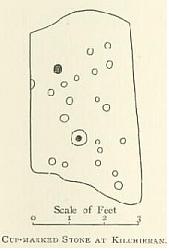 Clearly the stone has been there for many centuries longer than the 14th century chapel, and indeed may have predated the birth of Christianity by a couple of thousand years. That suggests that the Kilchiaran site may have been regarded as special for a very long period of time.

What the carvings represent, if anything, we can probably never know. Were they a way of recording information about the stars or the seasons, or were they just a pattern people made because they liked doing it?

The folklore suggests that people used stones and similar places for their own purposes long after the intentions of those who made them had vanished into the ancient past. In the case of Kilchiaran it is possible that the original carvings were made thousands of years ago but in more recent times they have been further worn by people turning stones in them and making wishes.

The folklore was described in an article by Ronald W. B. Morris in the Proceedings of the Society of Antiquaries of Scotland, vol. 100 (1967-1968) in his article "The Cup-and-Ring marks and similar sculptures of Scotland: a survey of the Southern Counties Part II." He wrote that at Kilchiaran the 'Cups [were] said to have been enlarged by former 'wishing' rite', and also noted similar customs at Kilchoman: 'At foot of Celtic cross 20yds east of church in cemetery. On slate slab (3ft square 0.25 ft high, forming base of cross) 4 basins up to 7 inch diam. 6inch deep - still used in 'wishing ' or 'fertility' rite by turning a pestle 3 revolutions with the sun and leaving a coin. Full of pennies on 1968 visit'; and also at Kildalton: 'On the flagstone base of the Kildalton Cross 7yds. north of chapel. On flagstones NE corner was a cup mark, similar in size and traditional use to that at Kilchoman - broken off and stolen c.1920'.

Across Scotland and Ireland all kinds of folklore and legends have become attached to cup and ring stones, as Kevin L. Callahan shows in his survery  Ethnographic Analogy and the Folklore of Cup and Ring Rock Art (2000)

More photos of the  Kilchiaran stone at the Modern Antiquarian.
Posted by Neil Gordon-Orr at 1:04 PM