Tales and Travels of a School Inspector

The 1872 Education Act created a system of state-funded schools in Scotland overseen by local School Boards. Long before Ofsted, school inspectors were sent around the country to check that schools were doing their job properly and that therefore that they were entitled to continue to receive funding . John Wilson, who was born in Dufftown in Banffshire and had been a headteacher in Morayshire, joined the inspectorate in 1882 and continued as an inspector until the 1920s, with his patch covering parts of the Highlands and many of the Islands - including Islay, Jura, Colonsay, Lewis and Orkney, among others. Shortly after his retirement he wrote 'Tales and Travels of a School Inspector' looking back on his long career (republished by Acair in 1998). 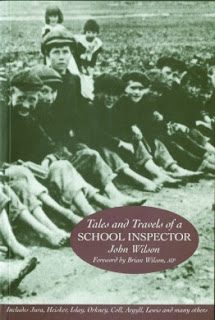 His account provides lots of interesting details of the social history of that period. He describes the poverty, including a visit to Lewis where 'children were vomiting water' during an examination as a result of being desperately hungry and gorging on water to try and fill themselves up. He mentions religious controversies, including Free Church ministers in some areas attempting to ban the teaching of singing in schools. And he remarks sadly on the decline of Gaelic - a fact partly explained by the fact that most teaching was in English.

Some children lived too far away to attend school, and the inspector was also required to check that they were being taught properly at home. He describes an occasion on Jura where 'A girl twelve years of age, daughter of a gamekeeper, who lived fully twelve miles from the nearest school' was late to meet him for examination as a result of stormy weather. So as not to miss the boat back to Islay, the inspector put the girl through her maths and other tests in a farmer's cart on the way to the ferry

Travelling around the islands in all seasons was not without its risks and he describes a hair raising journey in a storm from Colonsay to Port Askaig, where on finally getting off his boat at 2:30 am he was harangued by a parent complaining about his child's school!

In a chapter on hospitality he mentiond 'staying for a few nights in Bridgend Hotel in Islay' one winter, where 'The wife of the proprietor of Dunlossit in the north end of the island was entertaining a number of the leading natives'.  Seeing that Wilson was all alone, the inspector was invited to join the party as a result of which he 'spent a most enjoyable evening'.

Also in relation to Islay he talks of the 'exquisite crosses at Kildalton in Islay' and says that  'I never visited the small school of Kintour in this neighbourhood without having another look at it and other crosses within two hundred yards of the public road'.

Wilson was in Islay during the First World War, and recalls one of its great tragedies: 'When I think of Islay I see Port Ellen, where I had occasion to be during the Great War when the Tuscania, with thousands of American soldiers, had just been torpedoed by a German submarine off the south coast with terrible consequences. Two rafts of curious construction lay stranded on the sandy beach in front of the hotel. A series of loops of rope with small globular wooden floats was attached to each side. A soldier clutching one of these could keep himself afloat till rescued/ The bodies washed ashore were collected and buried in a fenced piece of grassy sward about a mile to the west of the village' (this burial ground was at Kilnaughton - see previous post on Tuscania burials).