The Islay Combination Poorhouse was in Bowmore - the 'Combination' referred to the fact that the local Poor Law Board, charged with providing for the destitute, combined the three Islay parishes plus Jura when it was established in 1844. In 1864 the Poor Law magazine for Scotland  noted the approval of 'amended plans for the Islay Combination poorhouse', and the Poorhouse opened the following year.

Peter Higginbotham's The Workhouse site has some further information about it, and notes that 'After 1930, the site became known as Gortanvogie House Poor Law Institution which accommodated 60 immates, including the provision of 10 medical beds'.  Like many old workhouses it ended up being used as a hospital. The old buildings seem to have been demolished in the 1960s, to make way for the new Islay Hospital buildings. The old name is remembered in the Hospital's address - Gortan Vogie road. 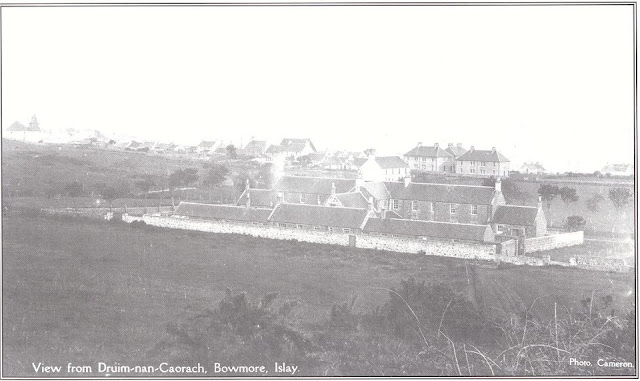 Who ended up in the poorhouse?

The 1901 Census provides some details, listing as it does the inhabitants of 'Poorhouse Lane' in Bowmore. The Governor of Poorhouse at the time was Murdoch MacLeod, a  51 year old man orginally from Rosshire. His wife Joan (aged 47) was the Matron and their 11-year-old daughter Ellen was living with them. Islay-born Maggie Johnston (28) and Ann Campbell (aged 25) were also working there as domestic servants.

So almost all the inmates in 1901 were Islay born, and had fallen on hard times. This was a time before the benefits system and state pensions. An old person no longer able to work, no savings to live off and no family to support them was effectively destitute. Perhaps some of these old people had no relatives able to help, maybe in some cases staying behind when others emigrated. In the case of the younger inmates we can only guess at what personal hardships and tragedies might lie behind their coming to the poorhouse.

(see also the 1881 Census records - at that time there were 11 inmates aged from 13 to 80, all five women were former domestic servants, the men included a shoe maker, a ship carpenter and a former farmer. The governor then was Archibald McIntyre)
Posted by Neil Gordon-Orr at 2:17 PM