The Medical Officer of Health for Argyll in this time was Roger McNeil (M'Neill)l, who was based in Oban. His report identifies some of the causes of ill health, as well as providing data on the prevalence of particular diseases. McNeill records that nine houses on Islay were 'Reported or Certified as Injurious to Health, under the Housing of the Working Classes Act'. Houses so reported were typically 'old, thatched houses, dilapidated and out of repair, with leaky roofs, unplastered damp walls, damp mud floors, and in want of proper draingage and ventilation. In many cases cattle and fowls were kept in the dwelling houses; in a few cases pigs'.

He calls for better health facilities on Islay, recommending that 'the Poorhouses in Tobermory, Lochgilphead, and Islay' be 'converted into isolation hospitals' (eventually this came to pass, the current hospital on Islay is on the site of the old Poorhouse in Bowmore).  The hospital facilities in 1891 were very basic:  'Near Bowmore, in Islay, there is another cottage, consisting of a kitchen, nurses room and two rooms for patients... The wards here also are not sufficiently far apart for the isolation of two infectious diseases at the same time. It is not well situated, being closed to the public road; it has no water supply; there is no disinfecting chamber; nor an ambulance for the conveyance of patients to it'.

The 1891 Census recorded that the population of Islay was 8514. In that year there were 162 registered births, and 148 deaths. 19 of the deaths were in children under the age of one year - an infant mortality rate of more than one in nine. There was a severe outbreak of Whooping Cough in April 1891, with 100 cases in Islay in that month, though this doesn't appear to have causes any deaths. 8 deaths were attributed to 'drowning' or 'violence' - Islay was clearly something of a dangerous place... 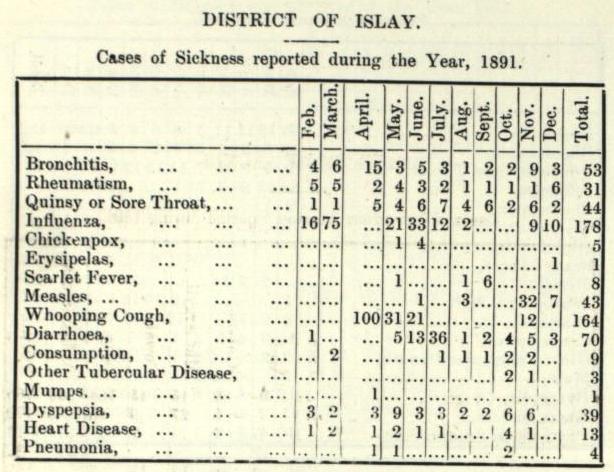