Otters and Otter Hunting on Islay

'We met a fellow visitor to Islay who was peering through binoculars. “Are you looking for otters?” we asked. He said he was, and that he could see nine or 10 of them on the estuary. He seemed very pleased. We wished him well, but couldn’t bring ourselves to tell him they were grey seals.. Suddenly, there it was, an otter, 50 yards ahead of us. We watched it pop up out of the water like a fishing float, and then dive back in, barely pausing for breath. It remained visible a little longer each time it caught something. We could see the fish scales glinting in the late afternoon sun as it chewed another snaggletoothed mouthful' (Telegraph, 10 August 2012).

Otters seem to be mainly spotted near the coast, but was this always the way?  This letter by J.G. Cornish in The Spectator Magazine, 13 August 1898, suggests otherwise:

'I have recently received several instances of the ways in which British mammals contrive to maintain their existence in spite of persecution. In the island of Islay in the Hebrides some years ago otters were very common round the lochs and inland streams. Then otter-skin waistcoats became fashionable, and many were killed for their skins. The survivors took refuge along the coast-line, and now are quite numerous there, but have not ventured far inland'.

Otter hunting was banned in Scotland in 1982, and those tracking otters today are now generally armed only with cameras. But at one time otter hunting in Islay seems to have been relatively common.

Edward Chatfield's painting  'The Otter's Cairn—a Scene in the Island of Islay' was exhibited at the Royal Academy in 1834, with the figures on an otter hunt in the painting including Walter Frederick Campbell (1798-1855), and his son John Francis Campbell (1822-1885). The painting was sold at Christie's in Edinburgh in 2008, but seems to have been misidentified then as by George Sanders (1774-1846), as discussed at All This Useless Beauty. 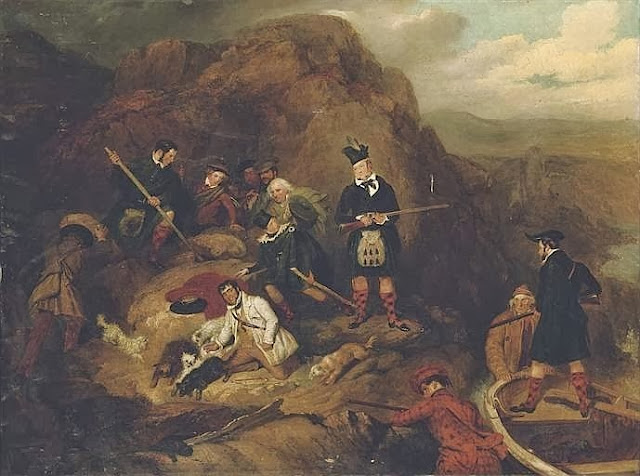 L.C.R. Cameron's 'Otters and Otter Hunting' (1908) mentions the rarity of an albino otter on Islay, stating that there was a stuffed white otter to be seen at Kildalton House.
Posted by Neil Gordon-Orr at 2:54 AM