Life for fishermen on Islay in the 1890s, as at many other times, was precarious and dangerous. These reports highlight several incidents from the period, including two court cases and a drowning.

The first report is of a strike by fishermen from Port Wemyss, which led to three people being jailed. They seem to have been convicted under Combinations of Workmen Act 1825, a law passed to restrict trade unions and picketing.

'A case of illegal combination among fishermen has just been tried at Inveraray before Sheriff Campbell Shairp. Three fishermen, Duncan Anderson, George Anderson, and Malcolm M’Neil, residing at Port Wemyss Islay, were charged with having on the 27th August last, at Loch Grinnard, Islay, formed part of a disorderly crowd for the purpose of preventing the lawful landing and disposal of herrings from fishing boats, and the lawful conveyance of the same from Loch Grinnard to Bruichladdich, and with having committed a breach of the peace. The men pleaded not guilty.

Mr MacLullich, Procurator-Fiscal, prosecuted, and Mr George Crawford, writer, appeared for the defence. A number of witnesses were examined, including several fish buyers and fishermen. From the evidence it appeared that the fishermen in the district had held a meeting and resolved to strike. The motive for this was the low price they were getting for their fish. On the night of the 26th August five boats went out, and this action on the part of their owners was resented by the other fishermen, who gathered in a body next morning to prevent the landing of the fish. There were from forty to a hundred persons in the crowd according to different witnesses. A successful attempt was made to prevent the men in the boats from putting the fish ashore, and some carts which had been sent to convey the herrings from Loch Grinnnard to Bruichladdich were forcibly turned back. Threats were made by some members of the crowd, although no actual violence was committed.

Mr MacLullich asked the Sheriff to deal severely with what was an act of illegal combination. Mr Crawford, for the defence, submitted that the men did nothing but what they were legally entitled to do. They simply said, in a civil way, 'You are not to land your fish.'

The Sheriff —They said 'You are not to do it': that is distinctly illegal. Mr Crawford held it was not proved that anything any of the prisoners did was really in the nature an an illegal act. His lordship found the charge against the three men proven. The charge, he said, was a very serious one. It was a very distressing thing to see decent men like the accused, who wore not men of the criminal class at all, charged with such an offence. The offence was one of a very important character. It was a breach of the peace of the worst description. The law in regard to such affairs as they had been engaged in was perfectly clear. It was that they might strike among themselves as much as they liked, and they might refuse to work to any employer; but the moment they tried to prevent other people from working, from taking any contract, the law would at once visit that offence in a way that would show what a grievous offence it was. It had been said there was no violence used on this occasion. The only reason no violence was used was that none was needed. The crowd came in such force that no man there could cope with it. They prevented the fishermen in the five boats from landing their herrings, and they turned the carts. They were thus interfering with people who were perfectly free to enter into any arrangements if they chose. They had done that in an out-of-way part of the country, where it was not easy to protect the people who were molested. Duncan Anderson and Malcolm M'Neil, who had been previously convicted, were each sentenced to 60 days imprisonment with hard labour; George Anderson was sentenced to 60 days’ imprisonment'.

The following year there was another dispute at Gruinart, this time a clash between Islay fishermen and their counterparts from Campbeltown. The latter in were fishing off Islay using trawl nets, whereas the Islay fishermen only used drift nets. This was seen as a threat to the livelihood to the Ileachs and the Campbeltown fisherman, on the beach at Gruinart, 'were surrounded by 500 fishermen, who pelted them with stones and other missiles' (Dundee Courier, 25 September 1891). 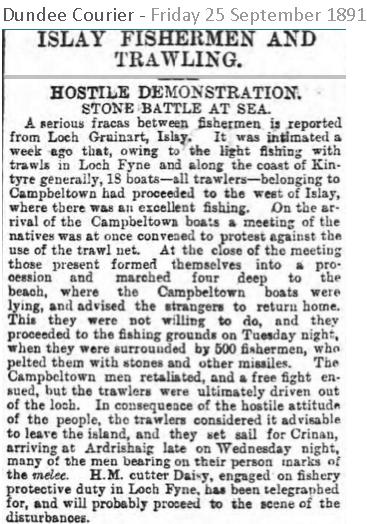 A court case relating to 'The Islay Fishermen's Riot' took place at Inverary, again before Sheriff Shairp, in December 1891, with eight people charged with contravening 'the Conspiracy and Protection of Property Act 1875 and also with mobbing and rioting' 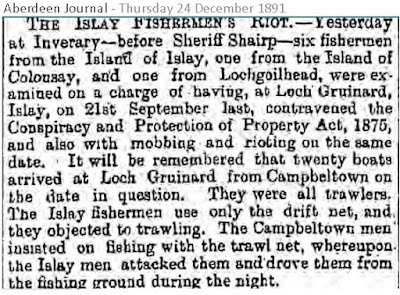 The dangers facing fishermen were highlighted in 1893 when two fishermen were reported drowned on a skiff  'manned by Donald Anderson, aged 20, son of the owner, and Alexander Graham, aged 34'. They failed to return to Port Ellen, and later 'the mast and sail of the boat were found washed up on the beach... The bodies had not been recovered' (Edinburgh Evening News, 31 January 1893). 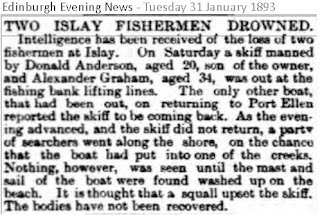